Promoting Vovinam in “Vietnam Culture Days in Russia” in 2015 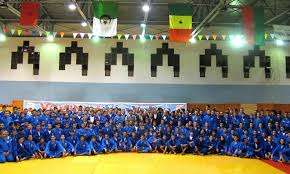 On June 25, 2015 Office delegations, athletes Vovinam Vo Danh Hai due – Secretary General World Vovinam Federation as consular team has left for the capital Moscow, with a delegation representing the Ministry of Culture, Sports and Tourism to attend the “Vietnam Cultural Days in Russia” took place from now until July 2, 2015.

Under the plan, the official opening ceremony of “Vietnam Cultural Days in Russia” will take place at the Union Building, Moscow capital at 19 pm June 25, 2015 with the participation of Ministers Hoang Tuan Anh, along with Minister of Culture of the Russian Federation. Vovinam Then, from June 26 to July 1, group Vovinam athletes will join with the artists continue their tour to the city. St.Pitersburgs and Yaroslavl in chain operations diverse arts and culture, attracting such as music and dance performances, martial arts, fashion with exhibitions, screenings, seminars on cultural cooperation, technology Art Vietnam – Russian Federation; programs to promote and advertise Vietnam’s tourism potential in Russia …

This is the second major international event in 2015 of Vovinam – Vietnamese martial, continued after the African Championships expansion – Grand Prix time I was held in early June in Algeria