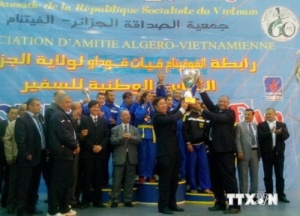 On 7 Sept. 11 at the multipurpose stadium in Chéraga county, the capital Algiers, was held National League Vietnam Vovinam Vo Dao – Second Cup ambassador, with the participation of 500 martial born under 70 teams from 22 provinces of Algeria.

Algerian Ambassador to Vietnam Vu The Hiep confirmed the organization at this tournament – by the Corporation of oil and gas exploration in Vietnam (PVEP) financing – further contributing to mount the two countries and nurtured more friendly relations and cooperation between Vietnam and Algeria.