This article by Chí-Linh Đinh is from Loa, an independent news website and podcast that broadcasts stories about Vietnam. It is republished by Global Voices as part of a content-sharing agreement. 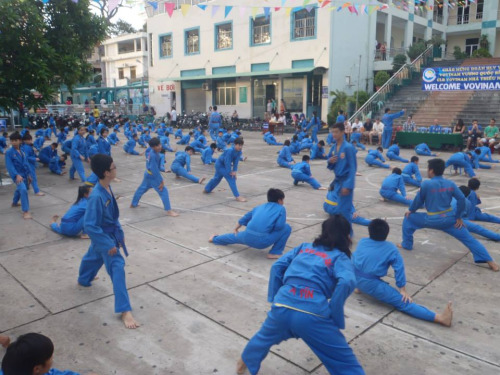 It’s a cold Sunday afternoon in a community center in Toronto. The floorboards creak. The whole room is full of activity. A martial arts class is in session. One of the thầy, or instructors, dressed in a light blue uniform and a yellow belt, calls out each đòn, or technique.

As he calls out each technique, every student in formation diligently follows his directions. The students are all practitioners of Vovinam.

Vovinam was founded by master Nguyễn Lộc. The founding master named it Vovinam, short for Võ Vietnam, or Vietnam martial arts. But the pronunciation is Vovinam so foreigners can easily read and remember it.

Thầy Tiến surveys the class quietly, observing the different sections of students. He doesn’t teach anymore, having retired, but every time he visits the whole class stops what they are doing and bows with respect.

According to Thầy Tiến, political changes in 1954 pushed “[Master] Lộc, who was born in 1912 in a village called Hữu Bằng just west of Hà Nội [to migrate] to South Vietnam, following the Geneva Accords that split the country in two.” It was in South Vietnam that Master Lộc continued to “spread the practice here until his death in 1960.”

After 1966, Vovinam expanded widely and was introduced to the public education system in South Vietnam. After 1975, Vovinam was outlawed by the Communist government. All the students and the masters continued under the radar, underground, until December of 1978, when Vovinam was again legalized.

Vovinam was created as a response to the French occupation of Vietnam. It is effectively a hybrid of older practices found in different regions of the country. Master Lộc had wanted to create a unifying force that could instil hope and patriotism among his countrymen. Vovinam was to be used, in his opinion, not only to better oneself, but to also help serve the country. 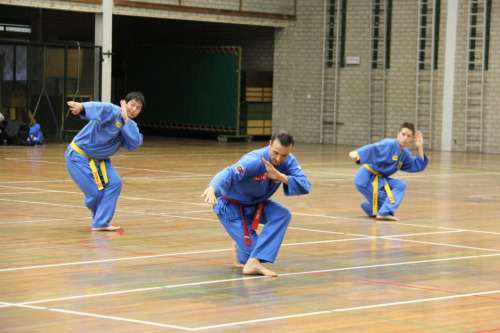 The uniforms, to this day, reflect that hope.

Unlike many other martial arts, the Vovinam uniform is sky blue,” says Thầy Tiến, and “the blue color symbolizes hope for change in our country and change within each Vietnamese person according to the philosophy of reforming your mental state.

Each belt color, besides denoting rank, has a symbolic meaning as well. Beginners wear the same light blue belt as their uniforms. As they go up in rank, their belt colors change from light to dark blue, to yellow, to red. This progression of colors represents the students’ closeness to their goal of mastering Vovinam. Light blue represents the sky, and dark blue is like the sea. As practitioners advance, yellow symbolizes their skin deep mastery, with red standing for blood. 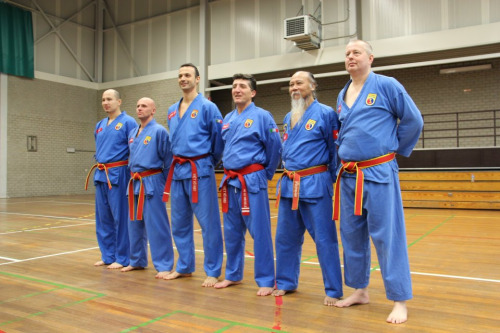 Masters are awarded the red belt, signifying a mastery of Vovinam at the blood level. Photo from Loa

The fact that Vovinam was created as a reaction to colonialism might explain why it has such explosive attack moves compared to other martial arts. Many of the blows are brutal and quick. They rely more on power and speed rather than finesse or elegance.

Explaining one of the signature takedowns that has made Vovinam famous, Thầy Tiến states that “as far as the martial art techniques are concerned, Vovinam has perhaps some of the most unique types, very different from other martial arts, and that’s the flying scissors takedown. This is when the fighter uses his legs flying into the air to grapple the opponent’s neck and tackles him to the ground. That’s a specialty of Vovinam.”

Vovinam is uniquely Vietnamese not just in its acrobatic forms. Students are tested not just on the physical, but also on their understanding of Vovinam’s philosophy. And regardless of where it’s taught, the language of instruction is always Vietnamese and classes are always free.

The practice is almost finished here at the Toronto community center. There are two new students today; both looking nervous. Thầy Tiến patiently shows them how to put their belts on for the very first time. The rest of the class bows to the instructor, right fist over their heart. Then they shout their final salvo, a traditional end to a Vovinam class.