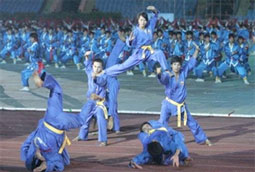 A delegation of the World Vovinam Federation, including Vice Chairman Le Quoc An and General Secretary Vo Danh Hai, has left for Algeria to attend a conference on the establishment of

After nearly one year of preparation, the conference is taking place in the capital city of Algiers on January 10-11.

The Vovinam movement has been developing in some African countries such as Burkina Faso, Algeria, Senegal, Morocco and Ivory Coast. In Algeria alone, there are hundreds of martial arts clubs with a total of more than 10,000 practitioners.