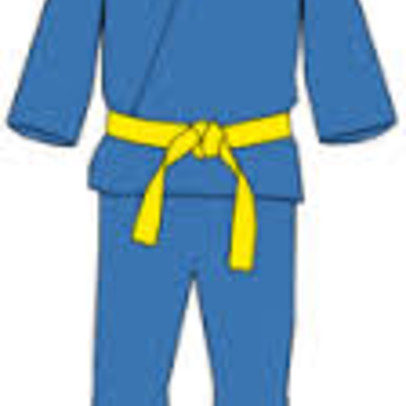 In life, the activities of internal nature whether public or any organization that typically carries a nuance, a separate meaning. On the one hand, it has to distinguish organizations and collectives have the same form; on the other hand, it also implies a meaning in the philosophy or conception of the organization separately.

As for costume martial arts, Vovinam disciples quite simple dress with a T-shirt and shorts. Grand Master Le Sang to the disciples and sect recovery in early 1964, the Council of the sect leaders have specified quite detailed and strict about dress and colored belts for martial Vietnam Vo Dao born.
While most other martial arts martial arts uniforms choose white, then select blue ocean Vovinam with symbolic meaning for the generosity and boundless as the sea. Besides, the color belts in the caste system also carries symbolic significance for the practice of martial arts and martial arts of Vietnam Vo Dao born. Specifically: Blue (hope), Gold (soil, color), red (fire, blood color), white (purity, color bone marrow).

Associated with the insignia of a martial arts, the name and straps are also meant coordinating principle Nhu Cuong trienva Often Translation theorem.

General principles of martial arts is valuable, it is a symbol of the strong, heroic, resolute heart to the will of the martial sharp rocks. Principles need very delicate, it is a symbol of mildness and in many cases have been the strength of the storm. Not only that, it also expressed gentle virtues of boxers. If there is “General” without “Demand” can transform inflexible, sometimes go rigid and thus reducing loss progress. However, “demand” can only resolve not allelopathic, or in other words, it carries more passive aggressive. Moreover, if there is no General properties, martial will lose the hero of virtue gas Dung in martial arts and does not promote the full essence of art and thought.

From this concept, after years of martial arts study East-West, Founder Nguyen Loc has sought to work with Yin-Yang principle to form coordinated development of Vovinam diamond demand today. The icon that represents where clan badges mounted on the left chest of martial arts uniform. Badges tied in that position forever, immutable, unchanging, it is the Immutable. Symmetrical with chest must be the name of the students. It varies by class level: when the color blue, while the yellow, while Red. Often it’s the service. 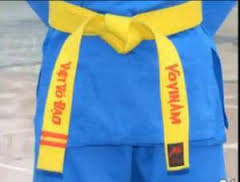 How belt of Vovinam

Similarly, two of the top straps with embroidered word disciple: one side is the martial arts, one side is VIETNAM Budo. VOVINAM word always on the left, because VOVINAM is the root, is known from the time of birth and immutable will, forever, remain unchanged, that is, the Immutable. Meanwhile, VIETNAM Budo is the name may be changed depending on the development of the discipline, such as from tomorrow VIETNAM VO DAO can be converted into Budo PEOPLE … On the other hand, the beginning of this belt attached to denote class level as a tile or multiple tile varies by stage of learning, training and cultivation. Often that is the translation. It is also consistent with international practice (expressed class right). 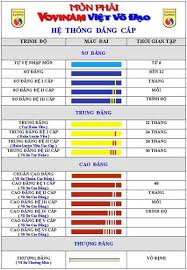 The belt type in Vovinam

Belt on the philosophy of Yin and Yang Often Translation

In summary, Vovinam – Vietnamese Vo Dao acknowledged the absolute, but also relative admitted, that is always in the invariant has so often translated. This is not only reflected in the technical moves of the professional world but also applies in the behavior, rituals, costumes …