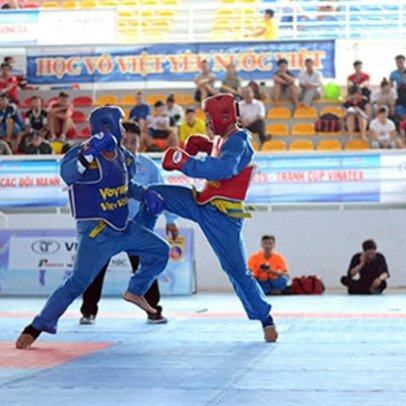 VietNamNet Bridge – The competition is underway at the 2016 Viet Vo Dao-Vovinam Vinatex Championships at the southern province of An Giang’s gymnasium.

Battle royale: Vovinam athletes during a versus match.

More than 330 athletes from across the country are competing at the 2016 Việt Võ Đạo – Vovinam Vinatex Championships at An Giang Gymnasium. – Photo thethaovanhoa.vn

The tournament, which commenced earlier this week, saw the participation of more than 330 athletes from traditionally b teams across the country, including HCM City, People’s Army, Thanh Hoa and Quang Ngai.

HCM City continued to reinforce their position as one of the leading teams with three golds in Vovinam forms by Tran The Thuong, Huynh Khac Nguyen and Mai Kim Thuy. The team also won two more golds in the team forms category to come out on top after the first day of the competition.

Other teams were hot on their trail for the top spot. Of note are the People’s Army team with two golds – one won by Do Quang Vinh in the 45kg division and one in self-defence forms.

People’s Police, Quang Ngai and Thanh Hoa also joined the race for the top spot after winning numerous golds in both forms and versus categories.

The increased number of athletes going to the competition this year indicates positive changes are taking place among the country’s Vovinam community. Teams and localities across the country are making investments to improve both their quantity and quality, according to organiser of the event, the Vietnam Vovinam Federation.

This year Vovinam will be introduced to the international community at numerous domestic and overseas events such as the Phu Dong Sport Festival (April 22 to 29), the Vovinam National Championships this October and the Southeast Asian Vovinam Championships in May in Cambodia.

The Vietnamese martial art will be a major focus of the upcoming 2016 HCM City International Martial Arts Festival (April 22-24), which will feature martial arts from various countries of Asia, Europe and America, as well as the 2016 Asian Beach Games in central city of Da Nang.

The tournament was scheduled to end today after competition in a total of 44 medal categories concluded.