The 2020 National Vovinam Championship is underway with 12 clubs competing for the top spot at the National Sports Training Center in Phnom Penh. 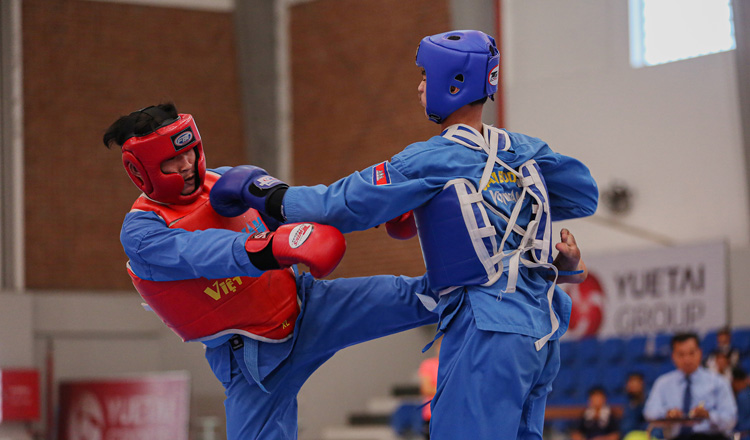 Opposing players try to outdo each other during the opening day of the 2020 National Vovinam Championship at the National Training Center in Phnom Penh. KT/Yuen Punlue

This year’s national championship takes on added significance with the approaching 2021 Southeast Asian Games in Vietnam. The tournament kicked off on Jan 27.

Vovinam was included in the list of disciplines that will be contested in the 2021 SEA Games, which will be held in Hanoi from Nov 21 to Dec 2. Vovinam, which originated from Vietnam, is a form of martial arts that involves armed and unarmed combat. The sport has nearly three million practitioners in more than 70 countries across the globe.

The national championship is the biggest Vovinam event staged here since Cambodia hosted the 6th WVVF Vovinam World Championship in 2019.

There are 12 clubs from Phnom Penh and other provinces that are competing in the tournament. Different ministries are also represented in the national championship.

According to the Cambodia Vovinam Federation (CVF), the top performers in the national championship will be selected to play in the 2021 SEA Games.

Ou Ratana, secretary-general of CVF, expressed optimism that Cambodian athletes will perform well in the next SEA Games. “Cambodia has the talent, experience and potential to win medals in Vovinam in the 2021 SEA Games,” he stressed.

Cambodia is among the global powerhouses in Vovinam. The Kingdom placed third overall during the 5th WVVF Vovinam World Championship in India four years ago.

That record was easily shattered two years later, with the Kingdom placing second in the 6th WVVF Vovinam World Championship. That edition of the tournament, which Cambodia hosted for the first time, drew 24 countries from Asia, North America, South America, Europe and Africa.

The 2020 National Vovinam Championship was supposed to be held earlier, but the CVF rescheduled it to another date due to the COVID-19 pandemic and accompanying sports bans. The national championship will conclude later today.