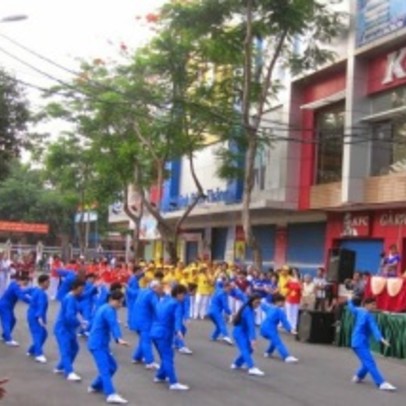 “Participating in the competition has 16 wards with over 400 middle-aged people. Ward least 16 people, most wards almost 30 people involved, “according to remarks of Mr. Nguyen Thanh Nhan – Director of the Sports Center District 11. 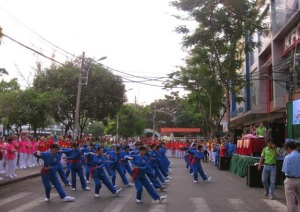 Jury Vovinam will put on technical points, but the style, costumes, the number of contestants will be the Sports Center and Union County 11 elderly people in charge. Units with 16 or more candidates are not penalized, support enforcement unit shall, not scoring. 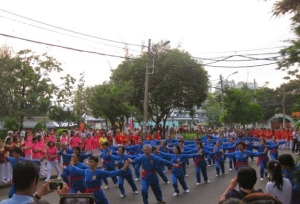 Mr. Nguyen Thanh Nhan said: “The spirit of the team competition takes quite impressive ‘talent level, energy level’, rhythmic, uneven and beautiful … So the results are not to be disclosed under the original plan but was Flexible change accordingly. Hopefully spirit Ayurvedic practice Vovinam will be scaling over “.

– Ward 5: Winner of beautiful costumes, expressive with red T-shirt printed with the National flag and Vietnam map behind him, with the words “Sea island homeland”.