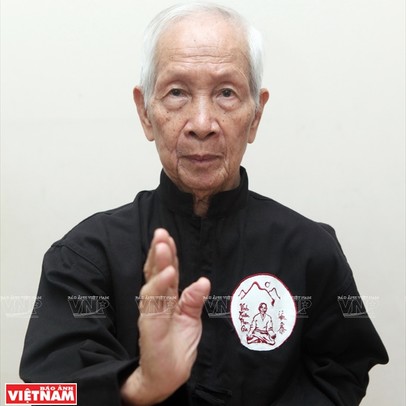 Speaking of him, the Vietnamese martial arts circle thinks of a veteran follower of two of the biggest and oldest schools of traditional martial arts in Vietnam, namely Vinh Xuan and Vovinam.

Yet, when asking about him, we learned his popular but truly interesting nickname ” Binh bun” (Binh noodle), which is closely associated to a martial art skill hardly practiced by anyone. This skill is called “Xuc cot cong” (within a moment, he could softly roll up his body neatly into a rice-noodle basket).

Although he is 86 now, he sebs not to be affected by time, still showing the clear-mindedness, quickness and skillfulness of a veteran martial artist. With his good mbory, soft, placid and clear-cut voice, he started telling us about the road leading him to the martial arts. There always existed in him two different characters “Cuong nhu phoi trien” (firmness in combination with flexibility) of two different martial arts schools – Vinh Xuan and Vovinam in Vietnam.

Vinh Xuan School was brought to Vietnam by martial arts master Tsi-kong, a famous Chinese martial artist in 1907. If Tsi-kong is the person who laid the first bricks for the development of Vinh Xuan – Vietnam School, Phan Duong Binh is among those who have maintained and developed it into a big martial arts school as a national treasure of martial arts.

Prompted by his childhood’s “innocent” dream to become like the noble-minded heroes in cloak-and- sword novels, he, when accepted by Tsi-kong as his discipline, became deeply engrossed in the martial arts and endowed with inborn talents, was imparted with the Vinh Xuan arts of fighting. As a result, he soon became a follower of the founding father of Vinh Xuan – Vietnam School. He was famous far and wide at home and abroad, with a large number of faithful followers in Vietnam as well as many countries in the world.

Vovinam was developed on the basis of Vietnamese traditional wrestling in combination with the genius of other arts of fighting worldwide. With the principle of “Cuong nhu phoi trien” (firmness in combination with flexibility), Vovinam is considered a martial arts school reflecting the Vietnamese people’s spirit and character. When he came to martial arts master Nguyen Loc’s training school, which was then attended by young Hanoians, Phan Duong Binh was completely bewitched by Vovinnam and applied to be a part of the school.

Since then, Phan Duong Binh has devoted his whole life to the preservation and development of the martial arts school deeply bearing the disposition and spirit of the Vietnamese people. He is a representative of the Vovinam – Viet Vo Dao of the north, who has inherited and materialised martial arts master Nguyen Loc’s last aspiration to dissbinate Vovinam to the south.

Nowadays, Vovinam has not only developed throughout southern Vietnam but also spread widely to various countries in the world. In 1995, he and martial artists in the Provisional Council of Overseas Vovinam – Viet Vo Dao Martial Artists issued a declaration to officially establish the Martial Artists Council to lead this martial arts school, which is the predecessor of the present-day Vovinam World Federation. So far, Vovinam, the only Vietnamese martial arts school, is in more than 60 countries in the world. This success is attributed to the great contributions of martial arts master Phan Duong Binh.