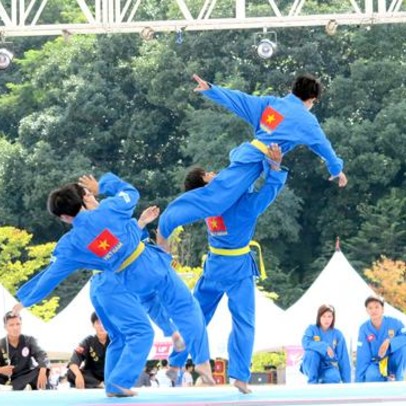 Giang has just returned from the meeting of the Sub-Committee on Sport and Law of the Southeast Asian Sport Federation on February 14-16 in Singapore.

He said that at the meeting, representatives of Laos, Cambodia, Myanmar, Indonesia and Vietnam proposed to add Vovinam into the official competition program of the 28th SEA Games.

However, to formally appear in the games, Vovinam needs to get the consent of the host country - Singapore.

Vovinam appeared in the two most recent SEA Games in Indonesia and Myanmar. These countries are building forces to develop this martial art.

Hai said the biggest difficulty is that the Singaporean Olympic Committee has long supported the development of basic sports in the Olympic program.

At the meeting, countries also proposed to add seven other sports, including wrestling, to the next SEA Games.

The Sub-Committee on Sport and Law of the Southeast Asian Sport Federation is the most important body, which has a voice in determining the number of subjects and the number of competing events at the SEA Games.

Vovinam - Viet Vo Dao - is a Vietnamese martial art which is practiced with and without weapons. It is based on the principle of between hard and soft. It includes training of the body as well as the mind. It uses force and reaction of the opponent. Vovinam also includes hand, elbow, kicks, escape- and levering techniques. Both attack and defense techniques are trained, as well as forms, combat and traditional wrestling. The wide range of techniques include punching, kicking etc. as well as forms, wrestling, sword, staff, axe, folding fan and others.

Self-defense techniques cover defense against weaponless attacks like choking from behind and defense against attacks with knife or sword. Advanced students learn to combine the techniques and learn to defend themselves against armed opponents. Instructors train traditional weapons like the long stick, short stick, knife, sword and sabre. Thereby the weapons serve as training devices for reaching optimal control of body and mind.

Vovinam was founded by grandmaster Nguyen Loc (1912 – 1960) in 1938, with the intent of providing practitioners with an efficient method of self-defense after a short period of study. Grandmaster Nguyen believed martial arts would contribute to freeing Vietnam, which had been ruled by France since 1859, from outside domination. Vovinam is a comprehensive fighting system which have principles totally different amongst a bulk of Chinese styles of kung fu, Japanese and Korean systems.