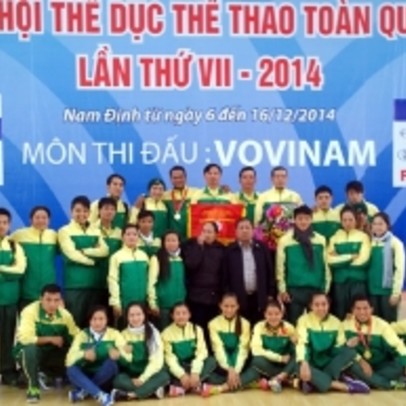 Experiencing 6 exciting days of competition, Vovinam was officially closed successfully. We could feel a thing, the date in Nam Dinh is the festival of Vovinam …

Vovinam is a traditional martial art of Vietnam has been on the rise very rapidly both in domestic and overseas. Attending the tournament, with the spirit of martial Vietnamese, Vovinam is not just a place to exchange, learn from experience exchange but also a place to promote Vovinam extensively to numerous friends both domestic and international. This is what Mr. Ngo Ba Huy, Vovinam Department, General Department of Sports to share with reporters believe the Sports page.

Mr. Ngo Ba Huy said: The days of playing in Nam Dinh is the festival of Vovinam. Nam Dinh has done very good work of organizations and all conditions are favorable for Vovinam closed the congress a success.

Besides, Mr. Ngo Ba Huy noted the development of the participating delegations as Lang Son, Khanh Hoa, Tuyen Quang. Mr. Ba Huy said: “For them, the issue is not put heavy medal in this tournament, but first opportunity to compete in a national award, followed by rubbing the professional quality, competition with other units, it was a big success. ”

“In the next period, to develop, promote Vovinam widely expected in March 2015, Vietnam Vovinam team will focus on three major tournament in Southeast Asia, Asia and the World” Ngo Ba Huy share.

Hopefully, the development of the Vietnamese martial essence of this land will become a widespread development and world-wide.