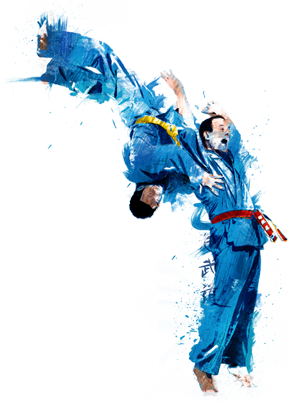 The casual observers at a Vovinam demonstration would most likely be amazed by the martial artists’ display of agility and the unique, spectacular flying neck lock moves. However, as a martial arts discipline with long history and great depth, Vovinam is much more than these public displays. Starting from founding Grandmaster Nguyễn Lộc to all current masters, Vovinam teachers have always stressed on building the complete martial artists with a clear, definite code of honor. This code of honor is summarized in the 10 Vovinam Principles and the motto “Bàn tay thép với trái tim từ ái” (“Hands of Steel with Compassionate Heart”). Training sessions or competition events organized by Vovinam usually start or end with a ranking master explaining or reminding all students of the code of honor of the martial artists.

Vovinam is practiced with and without weapons. It is based on the principle of between hard and soft. It includes training of the body as well as the mind. It uses force and reaction of the opponent. Vovinam also includes hand, elbow, kicks, escape- and levering techniques. Both attack and defense techniques are trained, as well as forms, combat and traditional wrestling. The wide range of techniques include punching, kicking etc. as well as forms, wrestling, sword, staff, axe, folding fan and others.

Self defense techniques cover defense against weaponless attacks like choking from behind and defense against attacks with knife or sword. Advanced students learn to combine the techniques and learn to defend themselves against armed opponents. Instructors train traditional weapons like the long stick, short stick, knife, sword and sabre. Thereby the weapons serve as training devices for reaching optimal control of body and mind.

The Yin & Yang-Theory (Vietnamese: “Âm-Dương”) states that everything in the universe and on earth is initiated through the interrelation of Yin (negative) and Yang (positive). As to this theory there are martial arts that prefer the hard over the soft and others that prefer the soft over the hard. Vovinam Việt Võ Đạo does not prefer any over the other. Hard and Soft are used equally to adapt to every situation, to every problem.

Based on Võ-Thuật the student aims to develop the ability to combine hard and soft at the right relation, in combat and in daily life. This aiming to develop both physical abilities as well as the student’s spirit. Not only the principle of the harmony of hard and soft but also many other things resulting from the training contribute to internalizing the martial art philosophy, e.g. fighting spirit, courage, tenacity, fairness, modesty and tolerance. Above all the training morality and the way of applying the techniques shape the students’ character.

The greatest difficulty is to see through ones own ego and then to overcome it. On success in doing so the Vovinam student will gain generosity and tolerance with other people. With the awareness that the most important thing in life of a human are other humans the final goal is to be able to not only help oneself but also to help others to live in peace and harmony with ones surrounding.

With the salutation, “Iron Hand over benevolent heart” the student is reminded about the main principle and about the goal of Vovinam Việt Võ Đạo with every training. It is also about using the opponent’s force and reaction, hence reach maximum effect with little force/effort.